EVERYBODY LIES EVEN YOU! 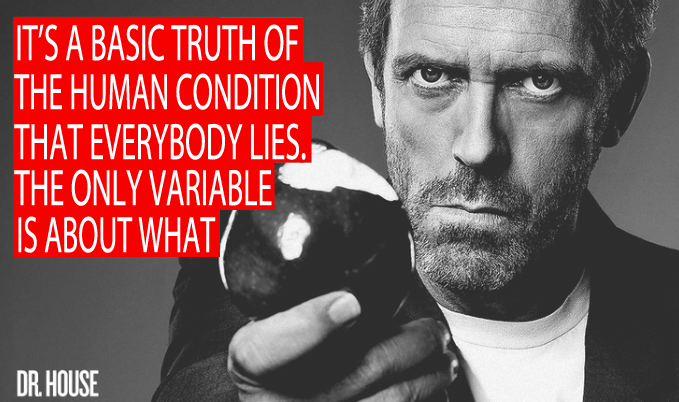 Some are little wee ones, called "White Lies" and then there are whoppers called "Real Estate Listings".

Okay - we are kidding.  Relax.  You should know by now we love to poke fun...at EVERYONE!

When it comes to "un-truths" - a spectrum exists...and the ones that cost you money is where we are going to eventually get in to...but we've decided to have a little fun first!  Read on.

Let's take a moment to explore briefly the spectrum of lies.  We'll start at the low end and work our way up.

Stop me if you have heard this one before;

"Honey, do I look fat in these pants?"

If you answer, "No" - you are assumed to be lying, if you answer, "Yes", you are most certainly and unquestionably doomed - and so are your your children's children.

The intent of the white lie is to protect someone's feelings from being hurt.  It serves no other purpose.

If you have children, you hear fibs everyday.  Let us set the scene...

It's 9:30 in the morning.  Mom is chilling out in the kitchen, sporting her Lulu Lemons, skulling a bottle of Captain Morgan, and watching "Let's Make a Deal"...suddenly the sound of breaking glass coming fromt he other room.

Mother rushes in to the living room to find her 2 children have knocked over her most favourite - and irreplaceable - limited edition, "Twilight - the movie" collector plate!

She looks at her 2 children as they sit amongst the wreckage, she scans them to see if they are hurt - they are fine.

Let's assess the situation - First off, who drinks Captain Morgan at 9:30 in the morning?!  That's an afternoon drink - everyone knows that.  Hahaha.

Secondly - the intent of The Fib - it's not to cause hurt...it's not to protect another from their feelings hurt either...no, this one is selfish...this one is to protect "one's own ass" - as it were.

It's clearly a lie...but usually comes by way of something accidental.  Once in a while this is acceptable - but if you increase the frequency of this sort of action - and then it's time for a paddling!

First off, I would like to go on record and state, "I have never told a Fish Story."

Shhhh....you hear that?  That growing sound of laughter?

Those are the laughs of EVERYONE who knows me all laughing their arses off because they know better!

I admit it...I'm like every other fisherman in existance...If I can't catch a Huge Fish in it's Mouth...you can bet your bottom dollar I've caught it by the Tale!

Just like, "Everybody Lies"...everyone has a friend who isn't content being 2nd place.  These are the ones who just have to be "better" than everyone...and they aren't afraid to "Stretch the Truth a Little" to further their Social Status.

This is usually harmless and the intent is exactly what it is...it's a stretched truth.

For instance, 2 friends could be sitting at the pool and one turns to the other and says, I bet I could do 20 laps in this pool without coming up for air.  The other friend says, "I've done 25".

Sure...maybe...if your friend is Michael Phelps - then absolutely possible.  But if your friend rocks a shirt that says, "U.F.C." but has the body that shouts, "KFC"...then it's probably a bit of a stretched truth.

No real harm here, just the assurance your friend is full of "you know what!"

This is also called , "The Church Lady Prayer Circle".

These are the slanderous and ugly "statements of fiction and fact" commonly found in the proverbial Sewing Circle.

Usually they start out innocently enough...but then they get down right nasty!

"Did you hear about Sarah?"

"Well, you didn't hear it fro me, but a friend of mine, I won't say who, saw her having lunch with some man - and they were carrying on for some time and appeared awfully friendly...if you know what I mean."

"Lord Jesus!  She MUST be having an affair."

"There is no other explanation!  I also heard she's been working late a lot these days."

"Hussy!  Doesn't she have children?  What about the Children?!  WHO WILL THINK OF THE CHILDREN!!!!"

Hahahaha...and on and on it goes.

The intent of these is nothing more than to smear the reputation of someone who is slightly better than the one/s carrying on.  It's meant to hurt the accused - without their knowledge - and to be denied if ever questioned.

The Word of the Salesman

Although these may not cause you a life of misery and pain...these are expensive and can put a heck of a dent in your bank account!

Any and EVERY statement that comes out of a Salesman's mouth is suspect...be on alert.

We've all heard the Car Salesman pitch about the car you are interested in buying;

"A little old lady traded it in and only used it to drive to church."

The intent of this lie is nothing more than to Sell you something - by any means necessary.  It's not meant to cause you harm - it's intent is only to increase the Salesman's pay cheque IF you buy a product from them.

Basically anyone who gets paid a direct commission from the money collected from you for a product or service sold.

And this ladies and gentleman is where we want to spring board from...we're gonna bypass the rest of the spectrum because it's safe to assume the next level on the spectrum are the ones designed in the spirit of True Evil...and they are not relevant to the matter at hand.

None of the other ones were really relevant either - but they were still fun!  The next level however is not fun at all...those bad boys are just intentional and designed to cause real harm and defamation...YUCK!  Those are nasty...those are the ones equated to bullying and perjury!  These are the ones that cause people to lash out and cause physical harm...or worse.

Let's not end with that though - let's rewind a bit and go back to the "Word of the Salesman" - let's get in to the meat of the subject...as it pertains to your next home buying/selling experience...

Your Real Estate Agent is Lying!  Are you the victim or the enabler?

Find out in our NEXT Blog Posting...which just so happens to be in the works...it's written...just looks like a cat's breakfast.  We'll release it soon though!  It's a "Top 10" of sorts.  We are sure you will love it!

Stay Classy Everyone and Keep On Being Awesome to Each Other!